A masterpiece of adaptive reuse and a powerful rebuke to the demons of Germany’s past.

Some ninety years ago, the original site of Berlin’s Tempelhof Airport was conceived. Today, Tempelhofer Freiheit (Tempelhof Freedom), is an airport turned inside out: a masterpiece of adaptive reuse and a powerful rebuke to the demons of Germany’s past. 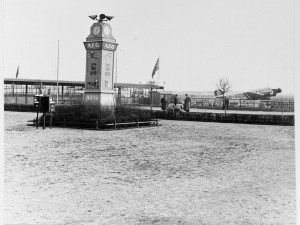 Ernst Sagebiel began expanding an existing airfield in 1934 as the first architectural salvo in Hitler’s creation of Welthauptstadt Germania (World Capital Germania). A strong, clean, brash fascist style infuses the aesthetic of what was at the time the largest building in Europe. Indeed, it was much more spacious than it needed to be: only a small part of the facility was ever actually used.

The façade’s simple and powerful rows of limestone columns were intended to convey the regime’s purity and indestructible force. The terminal building features a 1,200-meter-long arc of hangars beneath a massive roof that seems magically cantilevered out over the landing bays, an innovation that protected embarking and disembarking passengers from the elements. The design was meant to suggest an eagle in flight, with the semicircular hangars representing the bird’s spread wings. 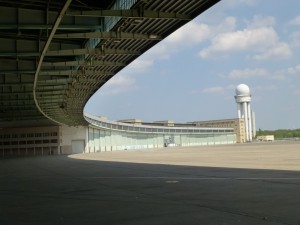 A breathtakingly massive entrance hall exemplifies the Third Reich’s aspirations of grandeur: “The mother of all modern airports,” Sir Norman Foster called it. Both symbolically and literally, this extravagantly preening complex embodied the Nazis’ most heinous iniquities. Columbia-Haus, the only SS concentration camp within Berlin, was located on Tempelhof’s edge. There, forced labor was conscripted to produce combat aircraft, including the Stuka dive bomber.

After the war, though, Tempelhof became associated with liberation instead of tyranny: it became the main landing field for “Operation Vittles,” the 1948-49 Berlin airlift. The Western Allies countered the Soviet blockade with 200,000 shipments of fuel and food that kept the city alive — in a remarkably massive effort of efficient planning and coordination, C-54s took off and landed every 3 minutes. Dick Kramer’s 1987 mural commemorating Berlin’s heroic resistance and America’s Cold War machismo still hangs in Tempelhof. 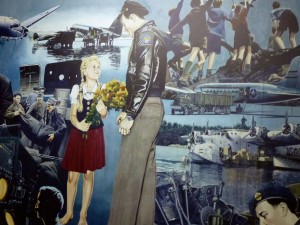 Berlin’s Tegel Airport, also in the Western sector, opened in 1948 to provide extra capacity for the airlift. In the East, Schönefeld was East Germany’s airport. All three airports operated commercially until 1975, when Pan Am and British Airways abandoned Tempelhof for Tegel, which had longer runways and more modern facilities; Tempelhof remained active only as a U.S. military base. It reopened commercially for short commuter flights in 1981, but after the fall of the Berlin Wall, German aviation officials planned to close Tempelhof and Tegel, leaving only a single Berlin airport — appropriate to the newly unified city and country. A field just adjacent to Schönefeld was developed as Berlin Brandenburg Willy Brandt Airport (a project that has been plagued by inefficiencies and construction flaws and is, at this writing, already two years past its announced opening date). Tempelhof finally shut down in 2008. 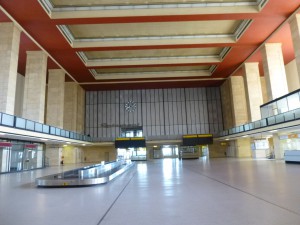 Plans are underway, albeit at Berlin’s typically lugubrious pace, to develop Tempelhof’s interior space, perhaps into a center for tech start-ups or some similarly trendy urban renewal scheme. Various civic agencies already occupy a few offices. The lofty arrival hall is rented out for occasional gala banquets and trade fairs, though most of the foot traffic through the massive compound is comprised of people like me taking the fascinating “urban-exploration” tours. But for the moment, it is mostly in a state of vacant disuse, which seems like a perfect comeuppance to the fascist hubris of its beginnings. It is a big waste of space; its bloated monumentality founders.

But outside, Tempelhof tells a different story. The site is close to central Berlin — only a 15-minute bike ride from the Tiergarten. The airport grounds have become a park, a festival, a happening. Basketball courts, football (soccer) fields, and baseball diamonds host leagues of amateur sports teams and pick-up games. 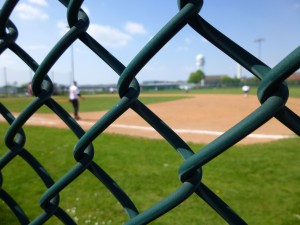 A grillplatz (barbecue area) accommodates hundreds of families, emitting thick clouds of smoke that recall—at least for someone forcing a trenchant historical juxtaposition — the airplane exhaust from when it was a working airport, though these fumes are much less noxious and more inviting than jet emissions. 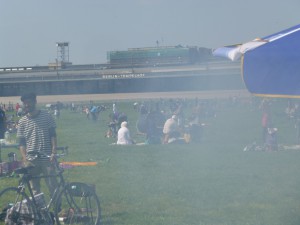 This smoke bears the aroma of a new Berlin: its odors are equal parts brats and kebabs; there’s a large Turkish mosque and cultural center right next to the airfield. I’ve never seen such a diverse mix of people anywhere else in Berlin; Turks, Asians (there’s a Hindu Temple down the street), and Western Europeans seem so comfortable together. Hitler would have hated it! It’s as if the newness of this space makes it a blank slate, so there are no traditions of exclusion here. Every single kid here is happy — how often can you say that at a “real” airport? 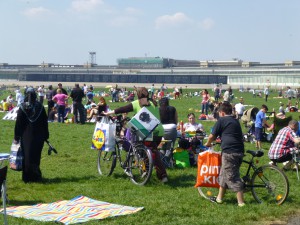 This is an immensely large space — which makes it all the more promising as a breeding-ground for the communities of the future. You could put a half-dozen more baseball fields in and still not make a dent in the footprint. Certainly you realize that an airport is a significant chunk of real estate when you’re on an airplane, pushing back from the gate and moving down the taxiway, onto the runway, and 6,000 feet later up into the air. But until you’ve been to Tempelhofer Freiheit you’ve almost certainly never experienced airport space on a human scale. There is enough room here to do just about anything.. 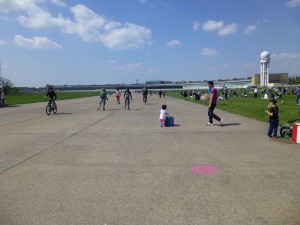 And what people do is: walk, lounge, barbecue, jog, bike, rave and dance, skate, play, flirt, scribble in chalk on the tarmac, cross-country ski, sunbathe. If this were a working airport, the fields would be subject to meticulous “grass management” regulations to ensure that the grasslands don’t grow higher than six inches (otherwise, birds begin to forage and pose bird strike hazards to aircraft). But here, no airplanes — so, no problem.

The runways themselves are the most fun, the most interesting place to be. You feel keenly aware of how you’re not supposed to be there, except . . . you are. And you’re not going to get hit by a plane — though if you’re not careful, you could get swiped by a bike, but that’s not too likely, because, again, there is so much room at Tempelhof: plenty of space for everyone to do his or her own thing. 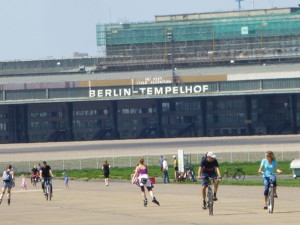 There’s something cool and liberating about being where you’re not supposed to be: I’ve felt this walking through New York City’s High Line, a vertical park recycled from a disused elevated freight rail line, and in Paris’s earlier iteration of that concept, La Coulée Verte, or on a tour of the Paris sewers, or climbing the Sydney Harbour Bridge.

People aren’t supposed to be perambulating through these places. Bridges, sewers, railways and airports are called “public works,” but generally they work only if the public is kept away. But at the Freiheit, everyone has free range of places humans aren’t supposed to inhabit. And the transgressive experience is more amazing than anywhere else because, as you walk outside the air palace meant to serve the glories of the Third Reich, you have the exhilarating feeling that you’re doing something Hitler wouldn’t have wanted you to do.

The airport has been inverted. It has become a destination in itself, rather than someplace people have to transit through to get somewhere else. Its grandiose interior sits empty, and the external landscape, designed for what was supposed to be simply the technical infrastructure of transportation, has blossomed into a playground of the human spirit. The war, the concentration camps, the mythos of lebensraum — all have been defused and cleansed by people using the space for the opposite of what it was meant to be used for.

Berlin is a city of palimpsests, and of fascinating tensions between the vital idealism of the present and the turbulent history of the recent past. Recycling and recreative projects like Tempelhofer Freiheit happen slowly, as they should — Berliners need to think carefully about the symbolism and the moral implications whenever they build, or tear down, or preserve, or commemorate anything. Elsewhere in Berlin, the oddly-named Topography of Terror is a new museum and memorial center built — after three decades of deliberations, plans started and abandoned and reconsidered — on the site of the Gestapo administration building. You can imagine how that project raised some hackles — reopening Gestapo Headquarters! Its sleek, modernist, gray-box design embodies everything the Nazis hated in architecture, which was a smart move, but the entire project underscores how charged public spaces can be in this city.

Everywhere in Berlin there are photographs — at cafés and stores, in the streets, in churches, at S-Bahn stations — of what the setting looked like in, say, 1890, and then again in 1942. There’s a ubiquitous determination to force citizens to consider every element of the cityscape before and during the war, which is clearly part of the process of figuring out what it should look like in the present moment: how it should feel, and how Berliners should remember the past in a way that will most intelligently inform how they will move forward into the future. At Tempelhof, they’ve achieved the task of transcending a bombastic fascist milieu by playing out on the lawn — making an insidiously overblown Nazi project both useful and harmless. Look how beautiful. 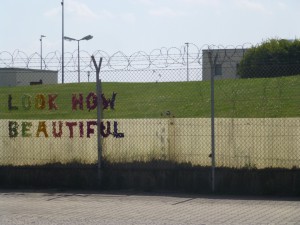 Tempelhof’s pleasant beauty is a triumph of “psychogeography,” a term Guy Debord and the Situationist International (SI) movement coined to describe the effects of the geographical environment on people’s emotions and behavior. Tempelhof exemplifies what Debord called a constructed situation:  “A moment of life concretely and deliberately constructed by the collective organization of a unitary ambiance” that produces “a superior passional quality.” The SI lauded “any method of making one or more individuals critically analyze their everyday life, and to recognize and pursue their true desires in their lives,” and proclaimed that “situationist activity consists of setting up temporary environments that are favorable to the fulfillment of such desires.” Such is Tempelhofer Freiheit. “Beauty is in the street,” according to an SI slogan — and, I’d add, at the airport.

Debord celebrated the psychogeographic experience of dérive, or “drift”: “In a dérive one or more persons during a certain period drop their usual motives for movement and action — their relations, their work and leisure activities — and let themselves be drawn in by the attractions of the terrain and the encounters they find there.” Tempelhof, in my humble opinion, provides the most effective dérive imaginable in our immediate moment. This free-place demonstrates the power of imaginative human determination to redress the mistakes of the past, however tragically egregious.

The New Psychogeography of Tempelhof Airport, Once a Nazi Landmark, by Randy Malamud, first published Dec 23 2013 at www.theatlantic.com

Editor’s note
As we won’t withhold the original preamble published in December 2013, here we come:

“This week, millions will take to the airways for Christmas travel. As families slog through the mundane reality of contemporary air travel, we might pause to reflect on the ghosts of airports past, and how they can reinvent themselves in the present.”